Mary Queen of Scots is a Better Restaurant than Lady 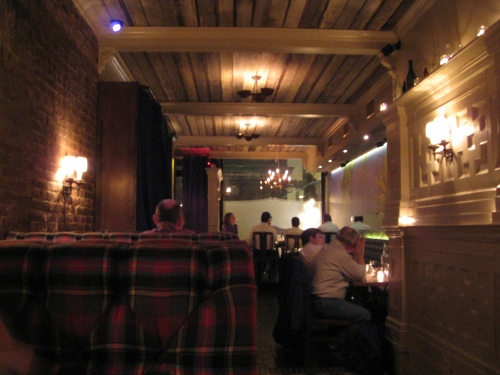 Mary Queen of Scots is one Jenny Jones-worthy episode of a lady. Crowned at nine months old; married to her first cousin then promptly strangled him to death; forced to abdicate to her one-year old son; fled to England to seek protection from Queen Elizabeth, then attempted to claim the throne as her own; and finally was tried and executed for treason after 19 years in custody. That’s what happens when you are raised without good parents.

All of that sounds like a perfect recipe for an exciting restaurant muse. It’s no secret that Highlands is one of my favorite restaurants in NYC {it made my Favor8 list}, so when they took over the old Allen & Delancey space to open a new restaurant and bar, Mary Queen of Scots, it became a must try.

The menu alludes to both Scottish and French cuisine with items such as the rataouille vegetable tart or house smoked scottish salmon. I had a fantastic salad of pickled beets, caramelized yogurt and toasted hazelnuts that I would highly recommend to anyone. The wild striped bass with potato bacon terrine, mustard greens and white wine cream came highly recommended and certainly sounded like a winner, but was sadly not warm by the time it reached my table and was underseasoned. I did have food envy with the MQS burger though. Served with house cut chips and spicy pickles, this is a sure thing {is that french or scottish?} 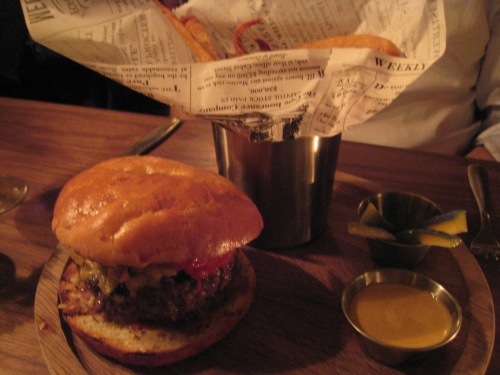 The Skim: Overall, Mary Queen of Scots was a good meal out, but it did not dethrone Highlands, which in my opinion serves up far superior fare. Both have great bars and an inventive cocktail menu though, so if you’re looking for a cool place to lose your head, MQS is a fantastic hideout.

As I referenced in a previous post, I’m off in San Francisco to be the best groom’s girl I can be in my brother’s wedding this weekend. Jackie, my soon-to-be sister-in-law, works for Ghirardelli. She’s pretty darn sweet as a person, but it also doesn’t hurt that she brings a dowry consisting of a lifetime supply of chocolate. Welcome to the family!

I’m sure I will have no shortage of things to blog about upon my return — I promise it will be more interesting than a post about rice and will include musings from Napa. In the meantime, visit some old favorites…

Enjoy a Cold One in the Garden:
Not so Standard Biergarten
Mission Dolores {Accomplished}: Great New Brooklyn Beer Garden
Nothing says Warm Weather Like a “Gut Biergarten” 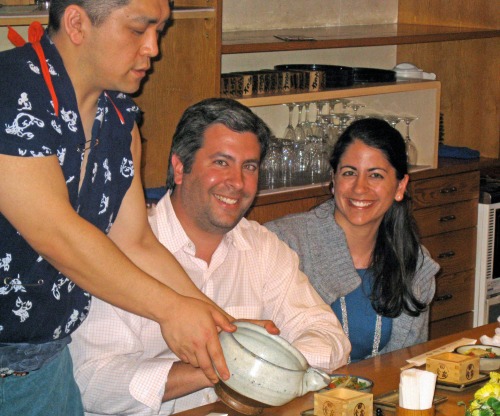 The Great Burger Debate: It’s All About the Bun @ Zaitzeff

When you start talking burgers with someone, you are inevitably going to enter into the debate about the best burger you’ve ever had. You might even pull out the top 3 list. But it’s not everyday you enter this great debate and then are told that one of those on the list is right across the street from where that very conversation takes place. So at 11pm last night I felt I could not pass up the opportunity to check out Zaitzeff, a previously unknown to me burger joint on the Lower East Side. The ambiance is simple —  with lamps providing a soft light, paintings on the wall and candlesticks on the table, Zaitzeff sort of feels like you’re eating in someone’s home. The menu mirrors the simplicity of the surroundings and is the key to why this burger is in fact so delicious. You can choose between American style Kobe or Grass-Fed Sirloin freshly ground onsite, which is served with lettuce, tomato, sauteed onions and the real key to this delight, a Portuguese muffin. If you are feeling like you really want to jazz it up, there are a selection of cheeses, bacon, avocado and even a fried egg that you can add for an additional charge. I have to agree, this was one delicious burger, and thankfully because it’s made from such lean beef it didn’t have me leaving wishing I had made that choice earlier in the evening.

The Skim: It’s all about the bun. Generally an afterthought to what goes in between, the slightly sweet Portuguese Muffin compliments the sweet sauteed onions and premium grass-fed sirloin or Kobe to create a simple, yet delicious burger. You won’t have grease running down your elbows, but you will likely be licking your lips after a visit to Zaitzeff. {18 Ave. B, bet. 2nd & 3rd Street}

More on The Great Burger Debate:
recipe goodness :: bison, a better burger worth biting into
5 & Dime: 10 oz. at Five Napkin Burger, that is 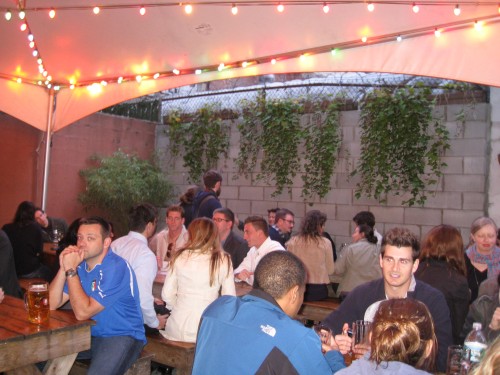 Something goes off in my head when the weatherman says 70 and sunny. First thought: all is right in the world. Second thought: outdoor drinks. I find that I’m always trying to come up with good places to grab a beer under the summer blue skies. Loreley, on Rivington, is just the place to keep on that list. Good German beers, good german food {oxymoron?} and yes, an outdoor biergarten fully equipped with communal wood tables and Christmas lights to provide an atmosphere conducive to meeting new people {read: cute beer-drinking boys and a select few highly qualified beer-drinking girls} or gathering with a large group of friends. The menu boasts standard fare such as Bratwurst, Schnitzel and oven-fresh pretzels — all good compliments to a 1 Liter mass stein of your favorite draft {0.5 liters available for the dainty at heart}.

The Skim: Come out from the dark, brick-walled bars you’ve been hiding in all winter — air out your drinking shoes and head to Loreley for a fresh-air brew and brat. Ein bier bitte. {7 Rivington between Bowery and Chrystie}

Filed under Eat Here!, {Drink Me}