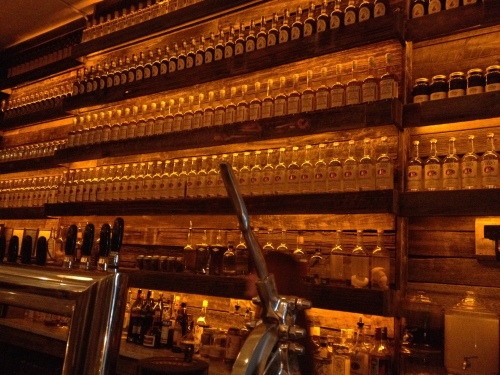 At first glance you might think this picture is of a really cool bar in Brooklyn. Lucky for upper west siders, it’s the newly opened Jacob’s Pickles — an outpost that took over a former lighting store and is bringing a new brightness to the neighborhood’s dining scene. Serving a menu centered around artisanal Beer, Biscuits, Pickles, Jams and Sustainably-Raised Meats, owner Jacob Hadjigeorgis saw an opportunity to bring simple American craft-comfort cuisine to an area that doesn’t welcome news-worthy restaurant openings with the same frequency as stops below 14th-street. I think Jacob is going to be a new friend.

The atmosphere has a casual elegant buzz about it. Soft lighting illuminates a wood-planked wall of bottles and jars behind the bar. The opposite wall is lined with tables intimately spaced along an elevated black leather banquette — the looks of which any man’s man would like in his own living room. Sit across from the banquette or at the bar and you’ve scored a seat in the most comfortable and cool looking bar stools I’ve seen in a long time. I should have taken a picture of these perfect perches, but with a deep seat, a back and arm rests, I promise they are the vehicles fit for a lengthy pickling session {you, not the gherkins}. The music is subtle so you can still have a conversation, but adds to the warm vibe — if I didn’t know any better, it could have been my ipod playing. It was the energy of the crowd that was really humming — I was enthralled.

The menu: 25 American craft beers on tap list some of my favorites {Founder IPA from Michigan}, as well as others begging to be sampled {Speakeasy-Prohibition Ale from California}. Intriguing cocktails include the Dirty Aphrodite, a martini made dirty with dill pickle brine, and the B.L.T Bloody Mary, which sounds like breakfast in a glass with peppercorn vodka, Niman Ranch bacon and a jalapeno pickled egg. There’s also a selection of artisanal root beers on tap, lemonade and other craft sodas if you’re looking to keep things simple. But even those can be converted to a float if you want to take it to another level. For the truly over the top treat, try the Sixpoints-Otis Oatmeal Stout float or the Allagash Black float. Beer and ice cream? Awesome. 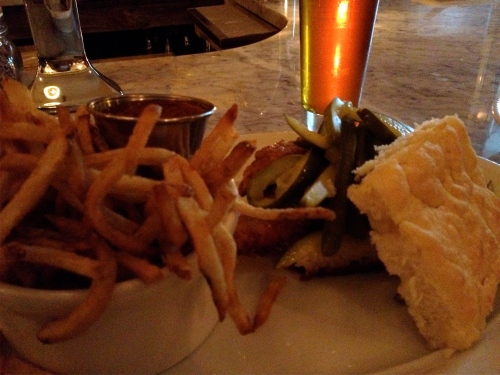 But don’t get too carried away with the drink selection before you order up some grub. Like pickles? You’ve come to the right place — special or hot sours, candied beets, salt & pepper asparagus, sweet & spicy carrots, sour green tomatoes are just a few ways to get started. There also seemed to be a lot of fried pickle plates coming out of the kitchen {everything tastes better fried}. Our neighbors were ooohing and aaahing over the mac ‘n cheese — not surprising, since Jacob owns a mac n’ cheese shop in Boston, which was his primary focus before gracing us with his presence. The southern biscuit sandwiches all sounded outstanding — we tried the creamy mushroom gravy smothered chicken and the honey, chicken & pickles versions. The latter of which was my order and was the perfect sweet-salty-vinegary marriage of flavors. I swapped out the cheese grits for fries and the house ketchup {which I would bottle up and take home, if I could}. Speaking of which, if you just can’t get enough of these specialties, you can take home jars of their house-made pickles, preserves and 32- or 64-oz refillable growlers of beer. I’ll have to speak to Jacob about adding his ketchup to the pantry. Full menu here.

As if you don’t already have enough reasons to hop on the northbound subway, Jacob’s Pickles will be hosting a daily beer tasting from 3-6pm, which will also feature specials. Sounds like a perfect reason to leave work early.

The Skim: Good vibe. Good beer. Good grub. ‘nough said.  Will be back for more — tomorrow. This newcomer has quickly won me over and despite only opening a month ago, I’m adding it to my Favor8 list.