Ok, I’ve been making hummus for years. My mother has been making hummus even longer. And her mother taught her, further extending our family hummus history. When a dish is so central to your family traditions, sometimes you have tunnel vision. Must. Be. Made. This. Way. Only. And then one day you stumble upon a recipe that hits you like a ton of bricks and you think to yourself, why in the world have I never strayed out of this damn tunnel. Welcome to the family spiced sweet potato hummus.

I was reading one of my favorite lusty food blogs, Spoon Fork Bacon, and came across this recipe. I knew before trying it that it was going to be brilliant. While the makings are rooted in the same ingredients we’ve been employing for years {chick peas, lemon, garlic, tahini, salt}, this hummus is elevated by the sweet additive potato, providing color and amazing flavor, as well as several of my favorite spices that give this dish a counterbalancing earthiness to complete perfection.

Filed under @home {recipes to love}

There is no shortage of Lebanese restaurants in metro Detroit, a region that is the most concentrated area of Arab-Americans in the U.S.  This is quite convenient for someone whose heritage is half Lebanese and loves to come back to Detroit for a traditional meal of grape leaves, kibbe, hummus, tabbouleh and other dishes that evoke childhood memories and are difficult to find as perfectly-prepared as I can enjoy at home. When I do go back to Detroit, there is a shortlist of Lebanese restaurants that my family tends to visit, so it’s rare to get us to break habit, try something new and be delighted by it. But on a recent trip back home, we went to visit a new restaurant in Royal Oak called Gemmayze {pronounced je-maisy and named after the hip SoHo-like district in Beirut,} a kitchen and lounge that is focused on introducing the best of modern Beirut to a community that is already familiar with traditional Middle-Eastern cuisine. The result is outstanding.

The modern atmosphere is a welcomed upgrade to the typically over-decorated, mural-walled Lebanese restaurants we usually visit. With two levels of seating, outdoor dining, a full bar, and an open kitchen with a brick oven for continually produced fresh puffed pita, Gemmayze has created an exciting atmosphere that gives its diners an accessible peek into the secrets of Lebanese cuisine.

But while atmosphere can only get you so far, especially in an area that knows a thing or two about what hummus should really taste like, it’s the menu that really sings an artistic tune.

My first point of critique is always with hummus. I’ve eaten my fair share of blended chick peas in my life and there is certainly a wide range of outputs depending on who made it and their chosen ratio of beans:tahini:lemon:garlic. While many fail the hummus taste test, Gemmazye did not disappoint, sending out a smooth and creamy version that is made so by slow cooking the chick peas to tenderize the bean and enable the perfect consistency for flawless blending. There was just the right amount of lemon and garlic to make their hummus a dish that didn’t last long when scooped up with the hot-from-the-oven homemade pita. A successful introduction to the rest of our meal.

We decided to forego ordering any entrees and instead ordered up a varied selection of appetizers. The Fattoush was fantastic — a salad that is typically served with lettuce as the main component, Gemmayze’s version eliminated the leafy green in favor of the other typical toppings: sweet crispy cucumbers, bright red peppers, juicy tomatoes, onions and the all-important crisped pita, all tossed in a lemon-sumac dressing that adds a lovely citrusy-spiced flavor to the otherwise straightforward veg. Amazing.

The Sumac-Encrusted Seared Tuna was an innovative take on a typical American pepper-encrusted version. It was fresh, light and a welcomed addition what we would ordinarily order when we sit down for a Lebanese meal. A menu must. 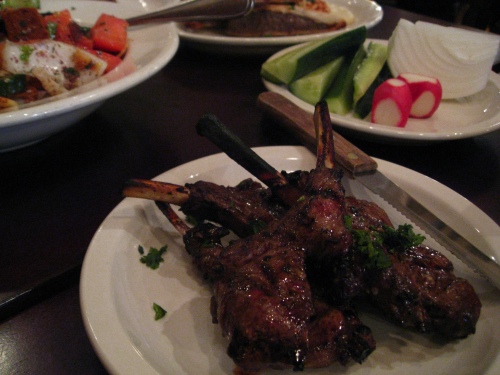 And while we’re on the topic of exciting additions to what we typically think of when ordering Lebanese food, let’s add the insanely succulent Baby Lamb Chops to the list. While lamb is central to the Lebanese diet, it usually takes the form of ground lamb kibbe or kafta. I have never eaten a lamb chop as juicy and flavorful as what Gemmazye served up on their menu. They are available in a small appetizer version — good for a few quick bites, or as a main entree if you’re craving more. These chops are perfect for less adventurous eaters who doesn’t want to try the typical raw lamb dish, kibbe nayee, which also exceeded expectations {a very important thing when you’re venturing into the raw meat world.}

One of the best surprises on the menu and a menu must: Ara-yes Halabi. Sadly devoured before a photo could be taken, this app consists of kafta stuffed in bread and toasted. Sounds simple, but the spiced kafta in the crispy bread was a new Lebanese dish for our family and we all agreed, it was the best thing on the table.

The Skim: It’s nice to see an innovative food scene on the rise in Detroit. It’s especially nice to see that even though I’m used to mama’s traditional Lebanese food, a place like Gemmayze can take the best of tradition, add a few exciting modern twists and package it all up in an atmosphere that appeals to both the past and next generation of Detroiters. In my opinion, they’ve set the bar very high for Middle-Eastern cuisine.