Do This! Kosher for Passover and Brooklyn Bound 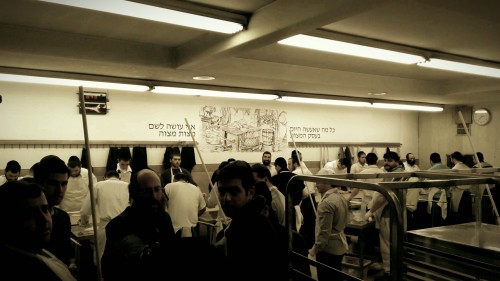 Most of the people I know are preparing for Easter. Pulling out baskets, polishing their patent leather and froofing their Sunday frills. But there is another important holiday approaching — one less sugary and pastel-colored — Passover. Even after living in NYC for 12 years, I realized I don’t know a lot about Passover traditions, so asked my friend Avi to lead me into the traditional Jewish neighborhoods of Flatbush and South Williamsburg, Brooklyn for a peek at and bite of Passover preparations.

With pretty much everything pickled from cucumbers to watermelon {yes, watermelon!}, and freshly grated horseradish that will clear the worst sinus congestion, The Pickle Guys is your stop for the ultimate condiment spread. For those who don’t want to jump a train for the full Jewish tour, you can also find an outpost on the Lower East Side. 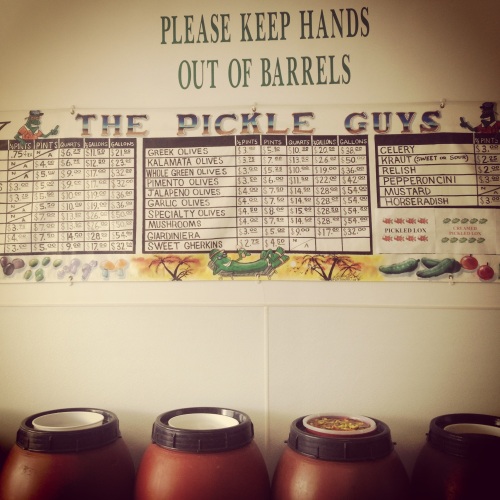 Please Keep Hands Out of Barrels 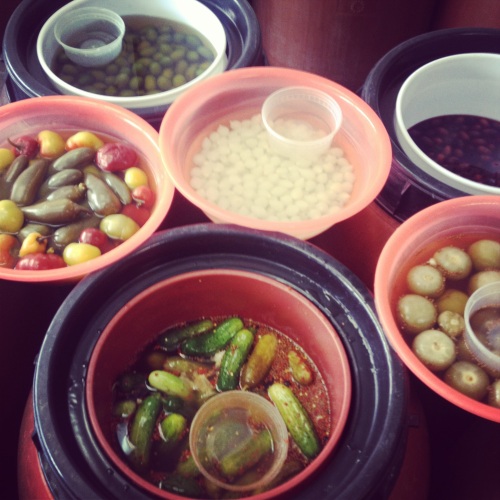 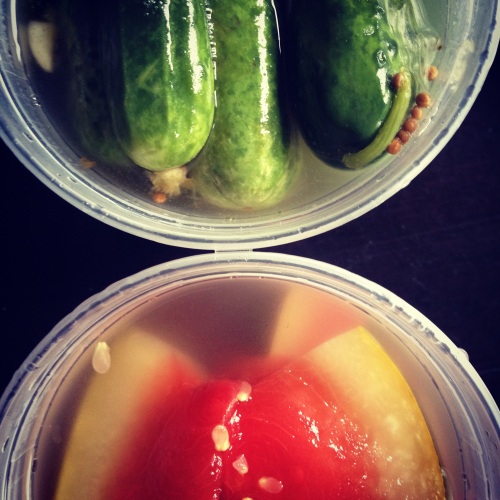 Next Up: Eichlers — the Barnes and Noble of Judaica stores

An essential stop for bestsellers like The Easy-Shmeezy Guide to Yiddish and the essential cooking reference, Kosher by Design — Teens and 20-Somethings. Cooking for the Next Generation. I pretty sure Julia Child had this on her bookshelf. 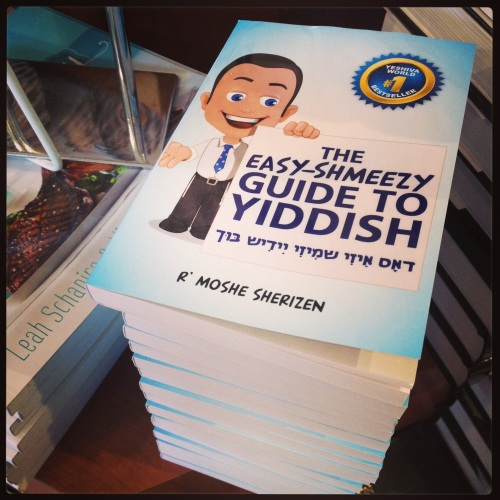 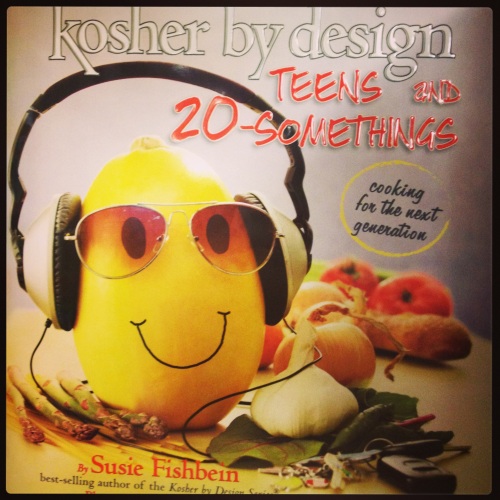 Please buy this for me

And then to the Whole Foods of Kosher Food — Pomegranate.

An entire aisle dedicated to Matzoh! I’m told Shatzer Hand Shmura Matzohs are the best and so that’s what made its way home with me. And here’s an exciting secret I learned while browsing the Kosher aisles: for those of you that like Coca-Cola made the European way with sugar, instead of our American corn syrup version, corn products cannot be consumed during Passover, so you can get your hands on the real Coke for a limited time if you visit a Kosher specialty store. Look for this yellow bottle cap. Ahhhh! 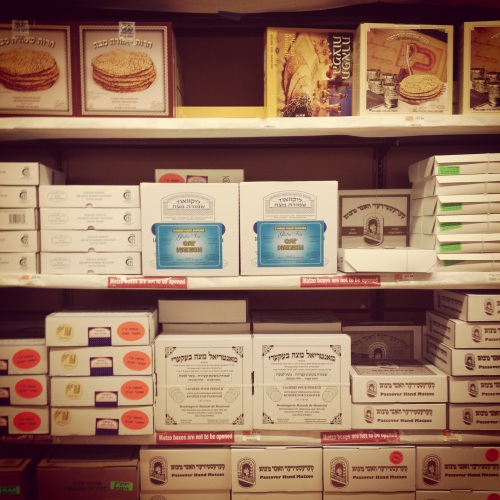 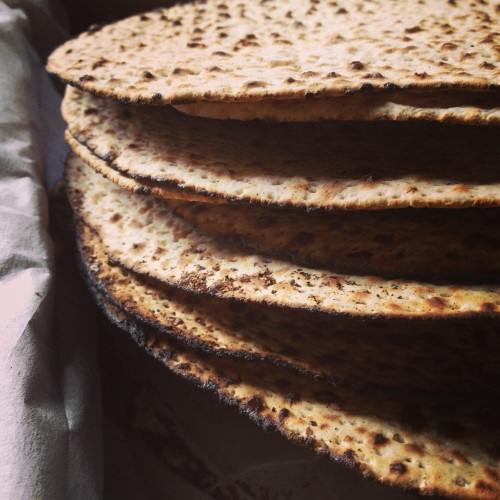 Flatbush is home to more middle eastern Jews, so I felt right at home ordering a platter of some darn good falafel, hummus, babaganoush and fluffy warm pita. Great stop to recharge and I’m told the Yemenite Soup is not to be missed — sadly, it was not going to be ready for another hour so we did miss this. Just another reason to go back. 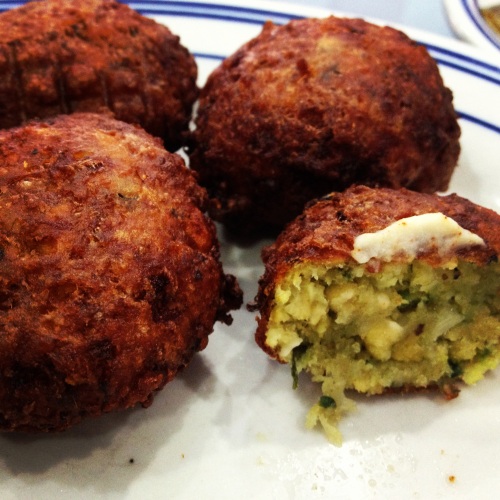 South Williamsburg is a much stricter Orthodox Jewish community — think Payot, long black coats and hats — so I had to try to dress the part with a long dress, tights and covered arms. Regardless of how respectfully I dressed, I was clearly an outsider.

To say I felt like I was intruding on Santa’s Elves on Christmas Eve would be an understatement. This Matzoh bakery was executing at full-steam with 47 men each handling a specific task. It was Henry Ford’s assembly line of Matzoh {see first photo of this post}. The water guy, the mixer, the divider, the rollers, the transporters, the hole-punchers, the bakers. A process that must be completed in 18 minutes according to the Torah and that follows strict guidelines of cleanliness — and apparently does not include a woman standing in the corner overseeing this. Word to the wise, don’t show up a week before Passover and expect a tour with a smile. It was not well-received that I wanted a peek into the inner workings of the Matzoh process. But what few glimpses I did capture {and the brief explanation Avi was able to coerce one of the workers into sharing} were fascinating — and helped me to understand why these provisions cost $25/lb. This is not your ordinary grocery store-matzoh. 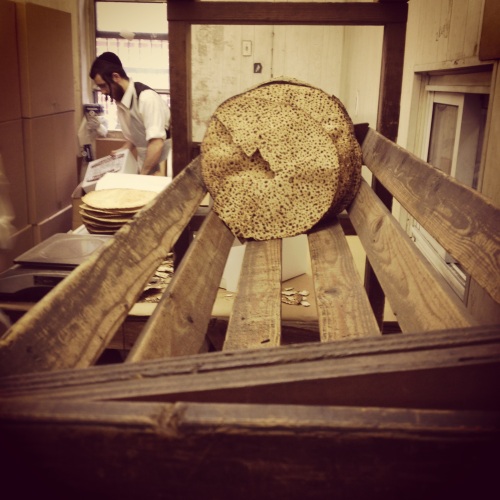 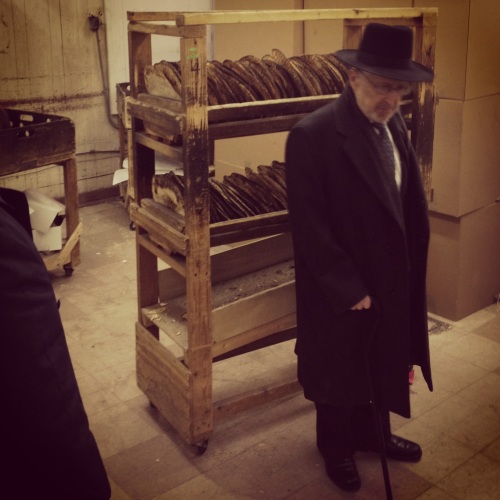 It was a long, but memorable day. One that could only be capped off by a refreshing Dr. Brown’s cream soda, a plate of cholent and some noodle kugel. If you’re looking for an authentic kosher Jewish deli, this is your place. Forget about Carnegie or Stage Door. Hop on a train {arms and legs covered} and come here. Do it all. 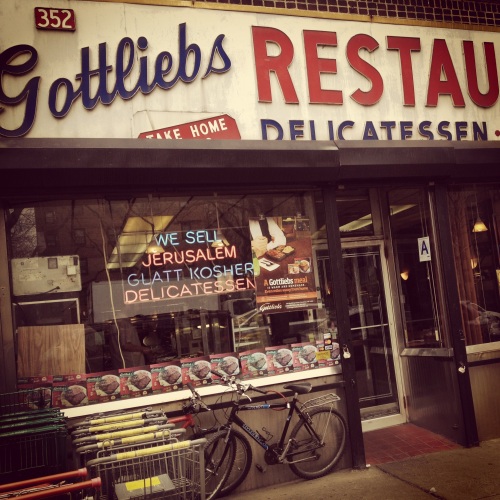 Filed under Do This!, NYC Best